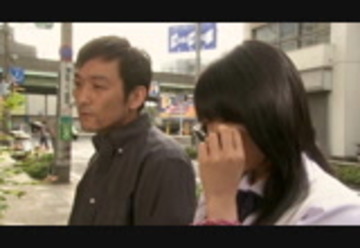 Plot Summary: After moving into a new apartment, a girl and her father find themselves at the mercy of a ghost that traps them there.

Review: If you're wondering why the title has changed, according to a promotional website, they began to shorten the title allegedly because writing out the full title cursed the writer due to all the enraged ghosts portrayed in the series. I guess I'm fucked. This isn't "Macbeth," folks. The real reason why I think it was changed was because this isn't an anthology film like the other entries. Instead we see, what I will assume is, the concluding chapter to the Ai storyline established in volume 3 part 2. Or did this come first? I don't know! Well, you remember Ai, right? Played by the lovely Mei Kurokawa, Ai popped up in half the stories, and now she gets her own movie-length tale of terror. So let's take one final look at the exploits of Ai, apparently, fully named Aimi.

The story is that Aimi and her dad are moving to a new apartment after their mother died. They choose an old building that, I guess, is cheap considering the dad doesn't work as much being a freelance journalist. When Aimi and the dad bring their stuff to move in, we are introduced to the weirdos that live in the apartment complex. Unfortunately, we don't learn as much as we probably should about the other tenants considering they play a big part in padding out the film's running time. Immediately you know something is not right with Aimi seeing a phantom schoolgirlthat and the movie's title is a dead giveaway. Once Aimi is settled in, she notices that another family living in the apartment complex is moving out quite hurriedly. An older tenant, played by Isao Yatsu once more, warns Aimi and the father to make sure they are always home before midnight. Oh, and there's some lame love interest for Aimi who dies way too early for me to even classify him as such.

From here, we learn the rules regarding the apartment from the family that escaped. You have to be home by midnight or you die, you can't say the ghost's name, Ai, you can't move out unless you're the oldest tenant and someone new moves in to replace you, and the last thing is some bullshit about other ghosts magically appearing. Basically, the tenants are mogwai. If you're wondering how on earth anyone would figure these rules out, they weakly explain that it was through trial and error. Yeahno, I'm calling bullshit on that. Plus, what time is it okay to go back out, huh? I would have burned down the entire complex or called in Sam and Dean, but that's me. According to the legends, Ai was the daughter of the apartments' owner and she disappeared one day; her lonely ghost haunts the building and doesn't want anyone to leave. I didn't like that they had the ghost's name as Ai, with Aimi sometimes being called Ai too, and factoring in we already know Ms. Kurokawa as Ai from the TV show!

One day, Aimi's little love interest and his family decide they will move out thinking the ghost could not reach them at a great distance and if they stay out in the open. I did like this part a lot, because it was a scene that you always wonder about when watching movies like "The Ring" and "The Grudge." Like, could Sadako/Samara come after you if you're hanging out around witnesses? Loverboy's family wait the night out at a restaurant with lots of people around, but then the power goes out and the family finds themselves separated and in the ghost's world. For some reason they chose to make Ai look normal usually and then turn into a monster rather than your typical Sadako/Kayako clone. However, the monster form looks lame, and I hated to see the infamous, pretend to spare someone only to kill them two seconds later, cliche. Once Ai has had her fun, the lights come back on in the restaurant and only moments have passed in the real world, and the family is now dead where they sat. By chance, Aimi's father happened to turn on a radio at the exact moment they announced the deaths the next day. This is probably a good time to mention the dad has drinking problems among other things

A few other occurrences regarding the ghost happen, but, like I said, they feel like filler. For instance, the old man sees ghosts that haunt him and his wife each night. These ghosts were comrades of the old man in WWII and they blame him for their deaths. As revenge, they kill his wife and resurrect her each day. Umm, where the fuck did this come from? You can't go making up new rules! There's something about one couple being so poor they have to drink their own blood as sustenance. For one, that's not going to cut it, and for two, god damn I'll give you food if you're that desperate! Then there's this couple where the guy is a bum and the chick is an idiot, but they race to get home before midnight one time. You know, this has me thinkingwouldn't this have made for a better anthology tale? Like, you have the wraparound about Aimi, and we see the tales of each tenant and their experiences staying at the apartment. Wouldn't that have made more sense and fit the themes of the series? Oh well.

Toward the end, the dad decides to get his shit together and begins to write a column for his magazine about the haunted apartments. When the tenants learn of this, they're angry, because they fear no one will want to move in and they will be trapped forever. The pathetic tenants unite to fight against the dad and Aimi, but the dad single-handedly holds these wimps at bay. When Aimi and the dad can no longer hold them off, they light a fire and climb out a back window (and should have broken their legs); these events unfold close to midnight mind you. Aimi tells the dad to hide while she solves the 30 year old mystery of what happened to Ai since she's become a detective all of the sudden. Apparently Aimi was having visions of Ai and would wake up with a kind of sand by her bed which is supposedly drywall to Ai's apartment where she was buried in the wall. Believing the curse to be over, Aimi tells the dad to come home since he only has seconds to spare. Uhh, did you have to run that far off dude?

The dad leaps over what he believes is the line that determines whether you're safe or not and then lies there on the ground like an idiot. With the last second ticking away, Aimi reveals she moved the line up and that the dad is outside the apartment complex past midnight. We learn, out of nowhere, that Aimi was being molested by her dad and wanted revenge obviously; this same thing happened with Ai as the two girls shared a common bond. Honestly, there's only one scene that connects to this revelation and you'd have to be SERIOUSLY reading into things to guess that's what happened. But come on, if this were true, Aimi was sure acting casual afterward. Ai then turns into the stupid monster form and kills the dad before fading away, I guess. The movie ends with Aimi staying beside Ai's skeleton mentioning how everyone has moved out, but she will stay forever. Well, it's good to know no one thought it would be a good idea to call the police especially considering there was a dead body lying in the street. This little revelation is cool and everything, but it's major bullshit. If she wanted the dad to die, how could Aimi guarantee he would stop at the line? And since you couldn't be sure of that, why not simply leave him out there past midnight? Nice try but the ending needed more thought.

I get what they were going for here, but I would have preferred they maintained the anthology aspect. Regardless, there are good ideas and the story is actually quite original and interesting. The look, tone, and atmosphere are well done and Ms. Kurokawa carries the film effectively. The twist is surprising despite the borderline absurdity to it and the way it is presented. On the other hand, there was a lot of filler that hardly connects to the plot like the other random ghosts. Ai turning into a monster made no sense and looks terrible, and there are a few loose ends to the story by the end. Overall, this film is on par with the TV show, but I feel like the show is more fun due to its variety. Also, I wanted a better connection to the TV show--perhaps referencing some of those individual segments. There is creativity to this movie, but it is often overshadowed by standard J-horror cliches. If you've followed along thus far, and enjoyed everything, this should not disappoint. As a standalone entry, I think it works fine, but you miss out to a certain degree.

Notable Moment: When the family is killed in public. I've wanted other horror films, in this same vein, to touch on this subject for a while now.

Ms. Kurokawa up to her old tricks:

Bonus: I have looked high and low to find "Kai-Kai: Tales of Terror From Tokyo," which is the last entry in this franchise, and I can't find it with English subtitles. I mean, I could watch it sub free and be completely lost, but then I wouldn't be able to give a fair review. And there's no way in hell I'm paying like $35 for a 50 minute movie. I don't care if Rika was in it, and that's saying something! For that much money, and so short of a film, it should come with a date with the star, Erina Mano, at the very least, or some way to edit myself into the movie saving the day! The point being, I will not be reviewing that final film any time soon unless it gets a general DVD release or someone uploads it on a free site.