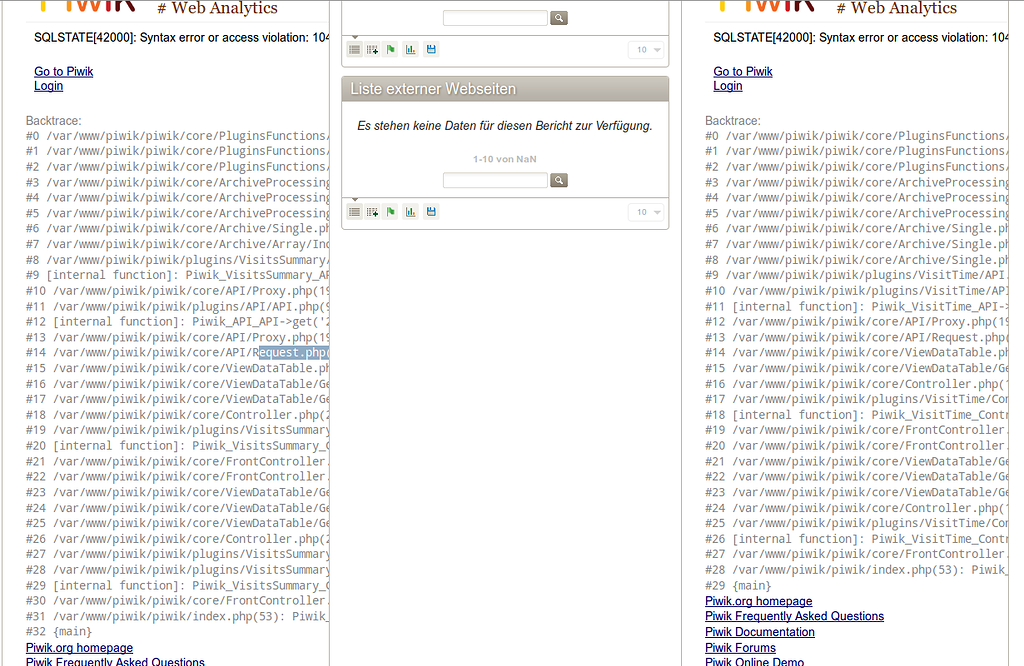 I get this every time I use my Mysql PDO class:

Heres how I execute:

You can't bind a table name:

Link to answer
People are also looking for solutions to the problem: the requested url was not found on this server. xampp
Source

Our community is visited by hundreds of web development professionals every day. Ask your question and get a quick answer for free.

Find the answer in similar questions on our website.

Thank you for your followup. In my implementation all of the SQL is in a small number of classes which provide an object-oriented wrapper that is used by the application code. There is only one piece of code that handles ALL queries that might match multiple records, in a class called RecordSet. The class is documented at https://github.com/jcobban/Genealogy/wiki/class-RecordSet where you can also see the source code. The point is that same piece of code is executed for many different requests and this particular query is the only one that has failed out of literally millions of different queries in the over 10 years that the code has been in use. The failure occurs on the request to determine how many records there will be in the response, and again on the query to actually obtain the records:

You can invoke this code and trigger the error by using the following URL:

It is critical to note the period "." between "Twp" and "E". It is the presence of that period that triggers the use of REGEXP because it is a special character in regular expressions. As a matter of fact the records that I am looking for actually have a period at that position, but the general purpose class cannot know that. Omit the period or replace that period with a character that does not have a special significance to regular expressions and the search is done with LOCATE, as is done for District. You can see that by removing or changing the period in the test URL The RecordSet class tries to avoid using MySQL/MariaDB specific functionality by emitting standard SQL that emulates the requested pattern whenever possible, but does not implement an emulation for the period character.

from is a keyword in SQL. You may not used it as a column name without quoting it. In MySQL, things like column names are quoted using backticks, i.e. `from`.
Personally, I wouldn’t bother; I’d just rename the column.
PS. as pointed out in the comments, to is another SQL keyword so it needs to be quoted, too. Conveniently, the folks at drupal.org maintain a list of reserved words in SQL.

I’ve got this exact error, but in my case I was binding values for the LIMIT clause without specifying the type. I’m just dropping this here in case somebody gets this error for the same reason. Without specifying the type LIMIT :limit OFFSET :offset; resulted in LIMIT ’10’ OFFSET ‘1’; instead of LIMIT 10 OFFSET 1;. What helps to correct that is the following:
$stmt->bindParam(‘:limit’, intval($limit, 10), PDO::PARAM_INT);
$stmt->bindParam(‘:offset’, intval($offset, 10), PDO::PARAM_INT);

There I was drinking my coffee when a customer complained about a problem: no order emails were being sent from his Magento shop.

My first thought was “This is going to be easy, my coffee won’t even get cold. It must be the change introduced in 1.9.1. and maybe the cron is not setup correctly”.

I have never been so wrong in my life.

Checking the error logs I found a strange error that made me cry because I knew instantly that I would have to go into the CORE and debug the life out of it:

I also found another strange error with the cron.php entry point and my spidey senses started tingling. I was on to something.

From the errors, it seems that there was an issue with column names, in both the UPDATE and the SELECT queries.

In Magento, before executing database queries, the columns get checked against the column descriptions for the respective table.
For models extending Mage_Core_Model_Resource_Db_Abstract, for example, calling the save method will call:

If something was wrong here, it was related to what the $fields variable contained.
Which, in turn, lead me to the main problem in my quest: the Varien_Db_Adapter_Pdo_Mysql::describeTable method.

In order not to execute the DESCRIBE query each time, Magento caches the DDL info for the tables.

The errors I found, happened when loading the DDL info from the cache.

The data loaded by the cache adapter and unserialized in this method looked something like this:

This info was loaded from the var/cache/mage–e/mage—MAGE_DB_PDO_MYSQL_DDL_eav_attribute_1 file:

This was a problem since this data was then used, assuming the keys of this array were table columns, which they were not :).

The two levels cache from Zend uses the _prepareData method to prepare a serialized array to store datas and metadatas information:

The issue was that when calling the cron or other scripts from the command line, the two level cache was not used. When reading data from the cache files, the data was assumed to be stored without the data, lifetime, expire and priority metadata.

Comparing a request from the browser with a command line request, I found that Mage_Core_Model_Cache::getBackendOptions was returning different options. This server was set to use APC cache, however when the cron was running ini_get(‘apc.enabled’) was false.

The Magento instance that was run from the command line was not able, thus, to use the APC cache, so it did not use a two-level cache, which led to it not knowing how to correctly read the data from the cache files.

The fpm Magento instance used APC and the two level cache and was saving DDL data into the var/cache folder enclosed in an array with the data, lifetime, expire and priority keys.
When the cron ran and read the DDL cache file, it used the data found there and basically considered for each table, that the columns are data, lifetime, expire and priority.

Changing apc.enabled to 1 in the cli/php.ini configuration file did the trick and solved the issue.

The (im)proper use of try..catch.

Most examples of operator you can find on the Net are something like this:

Shamefully, PHP manual is especially bad at it, having such examples all over PDO and other extensions examples.

Such a code is a result of a mere confusion. Look, what you actually have from it:

An error message being thrown right on the screen,

SQLSTATE[42000]: Syntax error or access violation: 1064 You have an error in your SQL syntax; check the manual that corresponds to your MariaDB server version for the right syntax to use near 'foo' at line 1

Looks exactly what you were looking for? Not quite.

NONE of these things you actually want.

As a matter of fact, you are writing this code only to be visually notified of the error, if it happened during development. The funny part is that for such a cause you need no extra code at all. I am not kidding. PHP is quite good with reporting errors, and need no extra assistance. If you leave your PDO code alone, adding no useless stuff, an exception will be translated into a fatal error, and PHP will be happy to report this fatal error usual way, just like any other error message.

Unlike your unconditional approach, PHP will follow site-wide configuration options, set for the whole server. If you want error messages to be shown right on the screen, just set the proper option for this: . That's all. In case of error, it will be revealed to you. Moreover, it will contain whole error message, including exact file name and line number where error occurred. And even more - a stack trace, which will help you to track down the code that actually caused the error:

Here you can see the full error message you were depriving yourself from.

And all that treasure without a single extra line of code! Just with default PHP settings! Isn't it wonderful?

All right, but what about production environment? That's very interesting question. In fact, most PHP users consider themselves the only users of their site. And that custom of catching and echoing every error is a sure proof for that - it's intended for the programmer only but inconvenient for the users. While in reality sometimes sites go live, and require totally different error handling in this case.

To handle an error on a live site we actually need:

And again - PHP already can do it all for us! If we turn , while , PHP will do all the things automatically - log error, show error page and HTTP code. As of the custom error page, it is best to be handled by the web-server ( for Apache and for Nginx).

— But I am doing it only for debugging purpose!!!

Well, you are doing it wrong. A programmer have to be notified of errors any time, no matter which mode is on.

— But what if I want something more complex than just showing/logging?

or, for a more general handling not only exceptions but all errors,

written just once it will relieve you from writing handling code again and again.

— All right, but is here a case when try..catch can be useful?

Sure! Just use try..catch only if you going to handle the error itself. Say, there is a code to process uploaded images. An error in such processing is not a fatal one and can be handled - so, that's the right place for the try..catch!

In short, if your error is recoverable and you have a certain scenario to recover - then use try..catch.

PDO::errorCode — Fetch the SQLSTATE associated with the last operation on the database handle

This function has no parameters.

Returns if no operation has been run on the database handle.

The above example will output:

is a keyword in SQL. You may not used it as a column name without quoting it. In MySQL, things like column names are quoted using backticks, i.e. .

Personally, I wouldn't bother; I'd just rename the column.

PS. as pointed out in the comments, is another SQL keyword so it needs to be quoted, too. Conveniently, the folks at drupal.org maintain a list of reserved words in SQL.

Same pdo error in sql query while trying to insert into database value from multidimential array:

Extracting array from sql query, using instead variable containing it fixes the problem.

Top 3 video Explaining SQLSTATE[42000]: Syntax error or access violation: 1064 You have an error in your SQL syntax — PHP — PDO