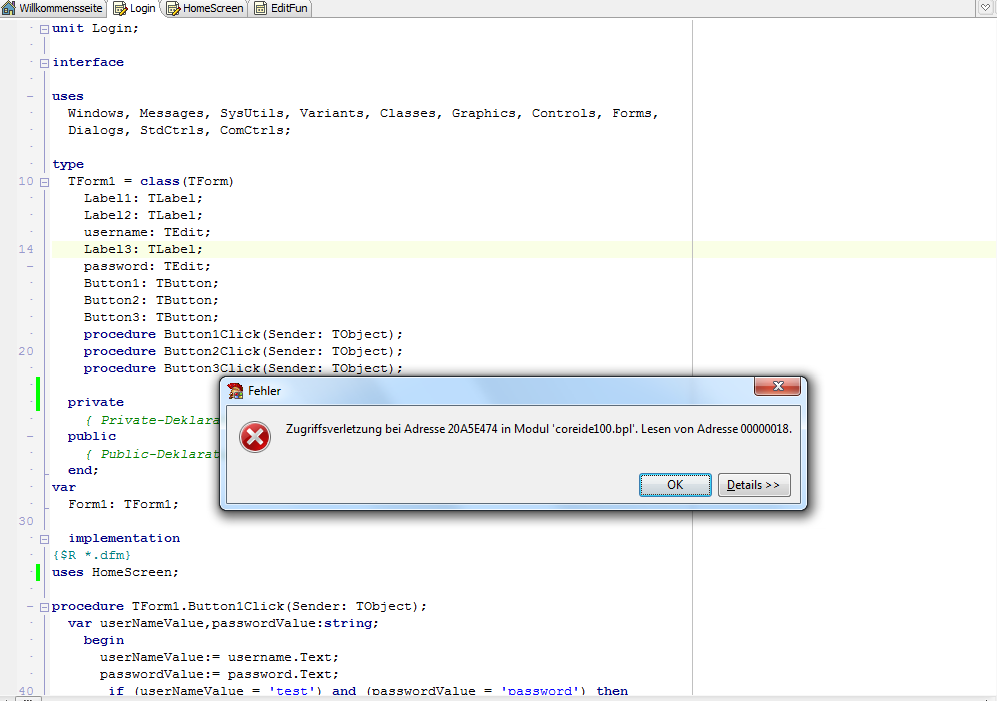 www.codenewsfast.com › cnf › article. Posted: Tue Aug 02, 2011 1:18 pm Post subject: Delphi Thread DLL creating error inject process the problem and the following dll and inject. And yes I KNOW that there is plenty of RAM (4Gigabyte) and PLENTY disk space (24*80GB). Is there some kind of setting I can set either in Delphi.

"> I have a class that is used for logging and it uses threading (so as not to
> disrupt the flow of the main program).
OK
> During testing I get this error on a seemingly random basis when I attempt to > create the thread: > "Thread creation error: Not enough storage is available to process this > command." > It's of the EThread error class type.
Never seen this. I use threaded loggers, and many threads for other purposes, & have never encountered this error.
> The actual code: > constructor TLogThread.Create(aFilename, aSectionName, aValue: String); > begin > FreeOnTerminate := True; > FFileName := aFileName; > FName := aSectionName; > FValue := aValue; > inherited Create(False); <--------Error Occurs Here > end;
Well, I'm not happy about setting the 'FreeOnTerminate' property on an object that does not exist. Try:
constructor TLogThread.Create(aFilename, aSectionName, aValue: String);  begin   inherited create(true);   FreeOnTerminate := True;   FFileName := aFileName;   FName := aSectionName;   FValue := aValue;   resume;  end;
Rgds, Martin

Thanks for your reply, Remy
The TIdSMTP is created in the thread, and after email send completed, the
TIdSMTP will be freed, and will be created again if a new email will be
sent. In this case, can I add a TIdAntiFreeze in it? And where do I create
it? Can I create it in the thread?
Thanks
"Remy Lebeau (TeamB)" <[email protected]>Ð´ÈëÏûÏ¢ÐÂÎÅ:45bdac[email protected]

>the Connect produce will create thread?

Yes, it does. That is the only way to implement the ConnectTimeout
functionality for a blocking socket. The actual connection is opened
in a worker thread, while Connect() keeps track of the elapsed time.
If it takes too long, Connect() closes the socket. The thread is then
killed regardless of whether the connection succeeded or failed.

Creates a thread to execute within the virtual address space of the calling process.

To create a thread that runs in the virtual address space of another process, use the CreateRemoteThread function.

A pointer to a SECURITY_ATTRIBUTES structure that determines whether the returned handle can be inherited by child processes. If lpThreadAttributes is NULL, the handle cannot be inherited.

The initial size of the stack, in bytes. The system rounds this value to the nearest page. If this parameter is zero, the new thread uses the default size for the executable. For more information, see Thread Stack Size.

A pointer to the application-defined function to be executed by the thread. This pointer represents the starting address of the thread. For more information on the thread function, see ThreadProc.

A pointer to a variable to be passed to the thread.

The flags that control the creation of the thread.

If the function succeeds, the return value is a handle to the new thread.

If the function fails, the return value is NULL. To get extended error information, call GetLastError.

Note that CreateThread may succeed even if lpStartAddress points to data, code, or is not accessible. If the start address is invalid when the thread runs, an exception occurs, and the thread terminates. Thread termination due to a invalid start address is handled as an error exit for the thread's process. This behavior is similar to the asynchronous nature of CreateProcess, where the process is created even if it refers to invalid or missing dynamic-link libraries (DLLs).

The number of threads a process can create is limited by the available virtual memory. By default, every thread has one megabyte of stack space. Therefore, you can create at most 2,048 threads. If you reduce the default stack size, you can create more threads. However, your application will have better performance if you create one thread per processor and build queues of requests for which the application maintains the context information. A thread would process all requests in a queue before processing requests in the next queue.

The newly created thread has full access rights to itself when calling the GetCurrentThread function.

Windows Server 2003:  The thread's access rights to itself are computed by evaluating the primary token of the process in which the thread was created against the default security descriptor constructed for the thread. If the thread is created in a remote process, the primary token of the remote process is used. As a result, the newly created thread may have reduced access rights to itself when calling GetCurrentThread. Some access rights including THREAD_SET_THREAD_TOKEN and THREAD_GET_CONTEXT may not be present, leading to unexpected failures. For this reason, creating a thread while impersonating another user is not recommended.

If the thread is created in a runnable state (that is, if the CREATE_SUSPENDED flag is not used), the thread can start running before CreateThread returns and, in particular, before the caller receives the handle and identifier of the created thread.

When a thread terminates, the thread object attains a signaled state, satisfying any threads that were waiting on the object.

The thread object remains in the system until the thread has terminated and all handles to it have been closed through a call to CloseHandle.

The ExitProcess, ExitThread, CreateThread, CreateRemoteThread functions, and a process that is starting (as the result of a call by CreateProcess) are serialized between each other within a process. Only one of these events can happen in an address space at a time. This means that the following restrictions hold:

A thread in an executable that calls the C run-time library (CRT) should use the _beginthreadexand _endthreadexfunctions for thread management rather than CreateThreadand ExitThread; this requires the use of the multithreaded version of the CRT. If a thread created using CreateThreadcalls the CRT, the CRT may terminate the process in low-memory conditions.

For an example, see Creating Threads.